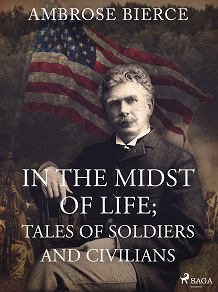 In the Midst of Life; Tales of Soldiers and Civilians

by Ambrose Bierce
The stories featured in this collection detail the lives of soldiers and civilians during the American Civil War. Bierce served as a union soldier during the Civil War and his experiences as a soldier served as an inspiration for his writing, particularly for the Soldiers section. In this way, Bierce's anticipates and parallels the work of Ernest Hemingway's, just as his civilian tales later influenced horror writers.

Ambrose Bierce (1842-1914) was an American writer, journalist, critic, poet, and Civil War veteran, best known for The Devil's Dictionary (1911). He dominated the horror genre as the preeminent innovator of supernatural storytelling in the period between the death of Edgar Allan Poe and the rise of H.P. Lovecraft. Bierce’s death was as mysterious as his strange stories; sometime around 1914 he left for Mexico, wanting to experience the Mexican Revolution firsthand, and was never to be seen again.