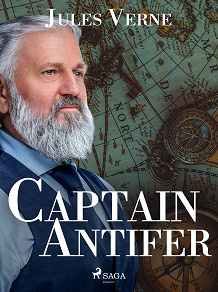 by Jules Verne
A 17th Century Indiana Jones, ‘Captain Antifer’ details the adventures of the eponymous captain as he strives to inherit the legacy of the wealthy Kamylk Pasha. Aided and abetted by the Egyptian signatory, Ben Omar, and his less-than-scrupulous sidekick, Nazim, Antifer’s travels lead him across Africa and towards Norway. However, is the legacy all that it seems to be? ‘Captain Antifer’ is a rollicking escapade, packed with mystery, excitement, and double-dealing. An exciting introduction into Jule’s works.

Jules Verne (1828 – 1905) was a French author, whose works are thought to have seen the beginnings of the science-fiction genre. During his career, Verne wrote more than 60 novels, 54 of which were part of the ‘Extraordinary Voyages’ series. Many f his famous works have been adapted for film and television, including ‘The Invisible Man,’ starring Elizabeth Moss, ’20,000 Leagues Under the Sea,’ starring James Mason, and ‘Journey to the Center of the Earth,’ starring Brendan Fraser.