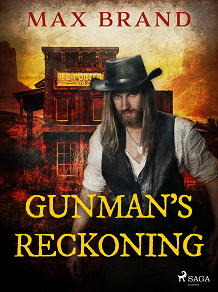 by Max Brand
George is a young man exploring the West when he comes upon a small town called The Corners. What he didn’t expect from this little town was to fall in love, or how desperately this love would ravage him.

Blinded by love he will be dragged into Machiavellian plots, hired to do a rich man’s killing. It is a complicated and tragic affair, where the power of love and lust can at once flip the plot on its head. ‘Gunman’s Reckoning’ is a nigh Shakespearean tale of innocence, manipulation and tragedy.

If you loved Liam Neeson’s ‘Seraphim Falls’ you will love this dramatic epic.

Max Brand, the pseudonym of Frederick Schiller Faust (1892-1944) was an American author of Western’s and pulp fiction stories. He was a prolific author of nigh on a hundred books, in several series spanning many genres. His character, Dr. Kildare, has been adapted several times over the decades in film, radio, T.V and comics. As well as that, he is credited with keeping the passion for the Wild West alive in his dozens of spell-binding novels. Brand’s untimely passing was another hallmark of his dedication to writing, keen to write a war novel he got himself assigned as a war correspondent with an American battalion in Italy, where he was sadly killed by shrapnel. His best known works include the series "Dan Barry", "Ronicky Doone", "Silvertip", "Dr. Kildare", and "Tizzo the Firebrand".