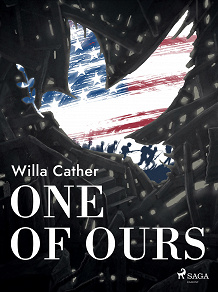 by Willa Cather
‘One of Ours’ is Willa Cather's Pulitzer prize-winning story about life on the American frontier. The country teeters on the brink of World War I and Claude Wheeler finds himself a conflicted man. The son of a successful farmer, Wheeler is unhappy, despite a comfortable life and guaranteed fortune.

A pious mother, demanding father and loveless marriage push the young idealist to a new and bloodier frontier. As America enters the war, Claude Wheeler is about to find what he’s been searching for all his life.

Willa Cather’s acclaimed novel is an examination of the changing American frontier and the making of a soldier.

Willa Cather (1873-1947), was an American Pulitzer prize-winning writer who won acclaim for her novels that captured the American pioneer experience. Her books include ‘O Pioneers!’ (1913), ‘The Song of the Lark’ (1915), ‘My Ántonia’ (1918) and Death Comes for the Archbishop (1927) which was an instant critical success.

In 1923, Cather gained widespread international acclaim when she was awarded the Pulitzer Prize for ‘One of Ours’, a novel set during World War I. Willa Cather was granted honorary degrees by Princeton, Berkeley and Yale and in 1931 she was honoured with the cover of 'Time Magazine'. The American Academy of Arts and Letters awarded her a gold medal for fiction in 1944.