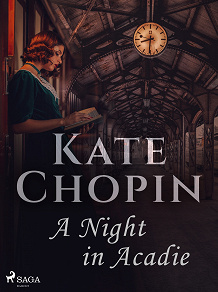 A Night in Acadie

A young woman tired of marriage resolves to leave her husband, making her way to New Orleans alone. Finished with work for the day, Telèsphore decides to take the train into town. A woman content with spinsterhood unexpectedly finds herself responsible for her neighbour’s four young children.

'A Night in Acadie' is a collection of short stories by Kate Chopin and a fantastic read for any classics fan.

Kate Chopin (1850-1904), born Katherine O’Flaherty, was an American writer of novels and short stories mostly set in the 19th-century American South. Her works deal with themes of the female psyche and women's limited life opportunities in the Victorian era, often in a naturalist style. She was considered controversial in her time, but is now praised as a pioneer of 20th-century feminist American literature.

Her most famous works include the novel ‘The Awakening’ (1899), which explores themes of rebellion against femininity and motherhood at the turn of the 20th century. Adaptations of this title include Grand Isle (1991) starring Kelly McGillis and Adrian Pasdar, and The End of August (1981).